JHardin1112 our very own MaxConsole Reviewer is back with another one of his great hardware reviews!
​
Thanks to the fine folks over at Gearbest.com, we here at MaxConsole.com got our hands on the latest H96 HD TV Box - the H96 Max Rockchip. After using the box for the past month, here are my thoughts.

Just to be clear here, I don’t own a 4K tv, so I was unable to test out the 4K quality offered by the H96 Max, but I was able to check out everything else, and I liked it. 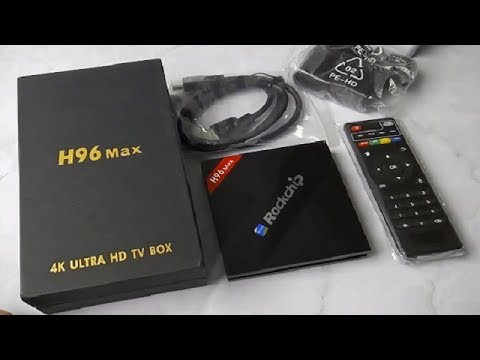 Video games are good in their original incarnation, but improvements can always be made.​
Apart from updating the games with great graphics, remaking also fixes any existing flaws and adds some beneficial content for good measure.

The remake of this game is the most awesome way of playing it because you receive 3 games for the cost of one. The games you receive are:
Apart from that, you get DLCs, visual updates, that make older Bioshock run smooth on current systems, and other extras, which are more than enough for the cost.

So E3 2017, or the Electronic Entertainment Expo (to give it its full name), is over for another year, and now the dust has settled.
​
It was, of course, held only a few weeks ago (June 13-15), and we thought it only fitting to have a little look back and pick out some of our main highlights from the 23rd installment of the event.

So, without further ado, here we go…

First up, one of the biggest reveals at the Los Angeles Convention Center was the launch of Microsoft's Xbox One X, formerly known as Project Scorpio and now billed as the "world’s most powerful console" — apparently 40 percent more powerful than any other.

Our Very Own Game Reviewer 'JHardin112' Is Back With Another One Of His Great Reviews!

This time out he is reviewing the Aaero for Xbox One, which is one of those rhythm-action games that are so popular now.
​
Aaero is a rhythm-action game by Mad Fellows that combines stunning visuals, intense aerial shooting action, and energetic EDM (Electronic Dance Music) tracks all while enticing you to get the hi-score. Typically games are broken down into levels, but in Aaero the emphasis is on the music and the rhythm, so you aren’t playing levels, but rather, you are actually playing the music tracks themselves. And how good it feels to be in the song.

Across all 15 of the tracks, players will use the left joystick to navigate their ship around the screen while moving forwards automatically (3rd-person) and attempt to trace a ribbon of light, target and destroy enemies and avoid...
Continue...
REVIEW - World to the West (XBox One)
Jun
05
0 1,525 by JHardin1112 : Jun 5, 2017 at 10:02 AM

World to the West is a third person top down perspective puzzle/action game that takes place in a lost ancient world with many different environments.
​
The game starts with the tesla maker chasing after her father and ends up teleporting to the ancient world. The tesla maker is a female wizard that uses magic as her special abilities. While the other characters; the miner, the aristocrat, and the explorer have their own backstories on how they get to the ancient world. There are many ways to get around by running through the different environments around the ancient world or teleporting to different totem poles found throughout the map. Of course you have to discover the poles first. The totem poles are found throughout the snow biome, grasslands, an area similar to a...
Continue...
REVIEW - Go! Go! Kokopolo 3D: Space Recipe For Disaster (3DS)
May
17
0 1,917 by JHardin1112 : May 17, 2017 at 4:18 PM

Our MaxConsole Game Reviewer @JHardin1112 Is Proud To Be Covering The Latest Nintendo 3DS Release!

Created by Tanukii Studios, Go! Go! Kokopolo 3D: Space Recipe for Disaster is the long awaited follow-up to the world’s first chase-em-up game Go! Go! Kokopolo, which released back in 2011 for the DSiWare service.
​
For the uninitiated, the chase-em-up style is where you attack enemies and they chase you down. It’s a sparsely populated genre, but certainly the two titles that I’m aware of in this list are very much worthwhile to play.

​
SRFD begins with a brief cutscene showing a space bunny crashing into a meteor and dropping pieces of some kind of a stone tablet (or something) down to earth. The 3 pieces land and disrupt the 3 playable characters. They soon gave chase after the bunny and thus the game begins. Each character has their...
Continue...
REVIEW - Soul Axiom (PC)
May
17
0 1,374 by JHardin1112 : May 17, 2017 at 9:22 AM

Yet Another Great Game Review By Our Very Own @JHardin1112 For You To Enjoy Reading!

You’re falling through your consciousness, screaming at high speeds through familiar memories and events only known to you, pondering why you’re trapped in your own expanse of imagination, until finally you come crashing against the deck of a sky ship adrift amongst a sea of storm clouds on the cusp of destruction….
​
At first stepping into Soul Axiom, a game that is essentially a 3D puzzler with hints of a platformer, you get the feeling of a great story, one that will shatter the barriers of storytelling that you have developed over time. Unfortunately, this story becomes lackluster due to the game being something of a disappointment.

Our very own @JHardin1112 is back with another Exclusive MaxConsole Game Review for you all to enjoy reading!

Ah!!! Another year, another entry in Rebellion’s excellent Sniper Elite series!
​
If you’re looking for a top-notch sniping experience that lets you strategically obliterate Nazi’s in the most graphic and horrific way possible (testicle shot anyone?!), then look no further. Sniper Elite 4 gives you that and more in spades.

​
Set in 1943, amidst the conflict of WWII, in the beautiful, but warn torn country of Italy, players assume the role of the elite OSS sniper, Karl Fairburne, as he is sent across the country in order track down and ultimately put an end to the Nazi’s use of their secret weapon against the Allies - a radio controlled missile. A quick history lesson for all those (like me) who don’t know what OSS...
Continue...
[REVIEW] Wintel Pro CX-W8 Smart TV Box
Mar
23
0 2,098 by ZombieGroucho : Mar 23, 2017 at 11:35 PM

The Wintel Pro CX-W8 is another in the long line of inexpensive "TV boxes" available from various re-sellers. What intrigued me about this particular model was the Intel Z8300 Quad-core processor and the fact that it was running Windows 10 instead of Android. And, of course, the price, which is normally around $90 USD. Having the full Windows Kodi experience at that price point would be pretty nice. With the Wintel Pro CX-W8 you can get it, but only if you're willing to put up with some major quirks and limitations.

Yet Another Exclusive Maxconsole Hardware Review To Enjoy Reading!

Our very own SonyUSA is back with another one of her great reviews, this time she is checking out the pro's and con's of the new USB-C to VGA/USB Breakout Adapter being sold by BC Master on Amazon, which is handy to have to charge all your portable devices when on the go!
​
Box Contents: USB-C to VGA / USB 3.0 breakout adapter, manual, and warranty card

Yet Another Exclusive Maxconsole Hardware Review To Enjoy Reading!

Our very own SonyUSA is back with another one of her great reviews, this time she is checking out the pro's and con's of the new 4-Port USB Card Charger being sold by BC Master on Amazon, which is handy to have to charge all your portable devices when on the go!
​
Box Contents: 4x USB Car Charger, USB-A to USB-C Cable (Nintendo Switch car charger, anyone?

​
BC Master does it again with another incredibly solid and slick looking car adapter. This thing has nice chunky plastic with a smooth piano finish and strong, firm contact springs. For the same price as a cheapo adapter that will break after 5 plugins and no protection circuity, you would...
Continue...
Horizon Zero Dawn
Feb
24
0 1,460 by GaryOPA : Feb 24, 2017 at 10:12 AM

All gamers would know the sensation of discovering a brand new game that immediately takes you into another universe!

A place where every minute details have been carefully thought of, along with terrifying creatures and many enticing mysteries.
​
Horizon Zero Dawn is exactly one of those games with a unique identity in the world of action role playing. The PS4 release date of the much awaited game is set for the 28th February.

Horizon Zero Dawn has been developed by Guerrilla Games, the same team behind the awesome Killzone franchise. They have brilliantly themed the game on a beautiful, post-apocalyptic. The game will take you into a distant future, where you will see how nature has taken over the ruins of a lost civilization. Humanity has resorted to live in primitive tribes, as they have lost the war to gain...
Continue...
[REVIEW] Mayflash F500 Universal Arcade Fightstick
Feb
18
0 13,538 by ZombieGroucho : Feb 18, 2017 at 4:31 PM

At first glance, you might think the F500 fightstick from China's Mayflash is a "knockoff" of a "real" fightstick. Nothing could be further from the truth.
​
The first thing you'll notice about the F500 is the weight. If you were expecting cheap plastic parts you're in for a surprise. This fightstick sports a sharp black metal finish with a sturdy joystick and red buttons. The buttons are clearly labeled, including icons for both PlayStation and Xbox configurations. This especially comes in handy when mapping the controller in various emulators. The graphic cut out gives the top plate a nice "cracked" look. Underneath you'll find some nice rubber feet to keep the F500 from sliding during heavy play sessions.

Online casinos are absolutely raking it in with their table, card, and slot machine offerings now equally as popular as PC and console games.

With an estimated 58.9% of people playing mobile games in 2017, could consoles start catering to the online casino and bingo audience to receive a cut of this lucrative market?
​
Are Casino Games Suited to Consoles?


​
There have never been any notable casino games for consoles, and perhaps there is a reason for that. Maybe they are just not suited to the console format, where gamers crave detailed multi-dimensional and intricate games. The typical console gamer in the US spends...
Continue...
Minigames: Save the World or Play Cards?
Feb
02
0 1,605 by GaryOPA : Feb 2, 2017 at 11:58 AM

Way back in 1987, a short minigame found its way into Squaresoft’s seminal role-playing game, Final Fantasy.

Accessible by boarding a ship, holding the NES controller’s “A” button and then pressing the “B” button 22 times, this sliding puzzle game rewarded the player with 100 gil (the game’s currency) for completion.
​
Today, minigames are ubiquitous (Final Fantasy VII had more than thirty, including snowboarding and basketball) but one particular kind of diversion has proven especially popular with gamers – cards. It’s no surprise; even offline, card games like Pokémon, blackjack, solitaire and Yu-Gi-Oh continue to attract players despite heavy competition from gaming consoles.

Maybe it’s due to an innate competitive streak (is there any greater thrill than beating a nameless, mute innkeeper at Tetra Master?) or maybe it’s just the fact that card games awaken the collector in every...
Continue...
Page 5 of 7

Play free slots for fun in demo mode on any device.